At age 23, Pua Wong’s life was thriving. She was a born athlete and had recently returned home to the Big Island after graduating from California Baptist University where she was an all-star on the water polo team. With her biology degree completed, Pua was studying for the MCAT (Medical College Admission Test) while working at a public charter school and volunteering with Hope Services Hawai’i Street Medicine program, a program that provides medical services to homeless and families. When she wasn’t studying or serving her community, she was spreading her infectious aloha spirit and surfing at Honoli’i Beach, her home surf break.

Then, suddenly, on January 29, 2021, everything changed. While boogie boarding on Mauna Kea with family and friends, Pua crashed. She was unresponsive. Strangers offered blankets, clothes and other items to keep Pua warm and stabilize her injuries until emergency services arrived.

Pua suffered extensive injuries including multiple broken bones and a TBI (traumatic brain injury). She was first rushed to Hilo Medical Center, but the severity of her bodily injuries and her head trauma made it necessary to medevac her to Oahu, where she began months of treatment and arduous rehab. Pua’s family is certain that her condition would have been much worse without the help and aloha given by the perfect strangers on Mauna Kea that day.

Pro-surfer Mikey “Redd” O’Shaughnessy, a fellow Big Island resident, also reached out to help. Having recovered from his own horrific wipeout on the North Shore, O’Shaughnessy referred Pua to Dr. Jason Keifer at Brain Health Hawaii (https://brainhealthhawaii.com). In prioritizing the brain health and performance goals of his patients, Dr. Keifer has relieved many teens and adults, including O’Shaughnessy, from the effects of post-concussive syndrome with his non-invasive, pain-free and non-pharmaceutical treatment called prTMS (Personalized Transcranial Magnetic Stimulation). prTMS restores activity to damaged parts of the brain.

The first step in treatment is brain mapping. As treatment progresses, brain mapping is done again to monitor progress. For Pua, watching this progress is nothing short of amazing: “Multiple parts of my brain were asleep. And now, they’ve awakened.” 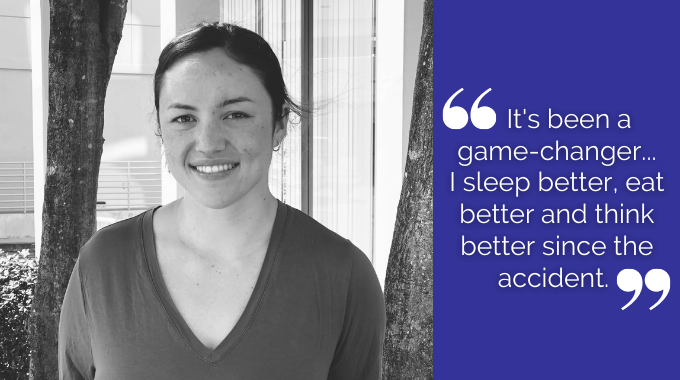 “Ever since I’ve been on this journey, it’s been a game changer,” says Pua. “I sleep better, eat better and think better since the accident. I’ve hiked Diamond Head with Jackie (another TBI survivor), I’ve walked over 3.5 consistent miles and biked 16 miles daily on a stationary bike. I’ve also gone back into the pool to re-learn swimming!”

Pua and her family are thrilled with her progress which is aided by her athletic background and her commitment to recovery. About 15 to 20 percent of concussion victims are said to suffer from symptoms for a year or more. These impact memory, attention and sleep, and can lead to chronic headaches, depression, and anxiety. Fortunately, Pua was able to get help before these symptoms set in. “I was lucky at not having to suffer noticeably from all those symptoms. On the other hand, I may have simply let them go unnoticed. They could have appeared later and worsened over time. I’m glad I met Dr. Keifer before that.” 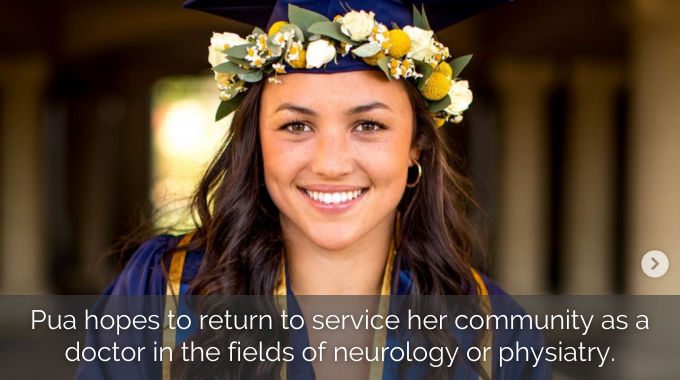 Thanks to the many health providers that helped her and the kind strangers on Mauna Kea, Pua is looking ahead to an exciting future once again. She is preparing once more to take her MCAT and hopes to return to serving her community as a doctor in the fields of neurology or physiatry.